Angela Milne, 49, who manages the Southampton, Gosport and Godalming branches of Berry Recruitment, also raised more than £4,000 for charity – blowing away her £500 target.

Originally from Menstrie in Scotland, Angela lives now in Sarisbury Green and completed the 200 lengths at the Holly Hill leisure centre in one hour and 44 minutes.

The money raised will go to the Marie Curie charity for the terminally ill and the challenge was completed in memory of Angela’s father George who died a day after being diagnosed with cancer 14 years ago.

Angela said: “When I started this I couldn’t do four lengths without really blowing, so I started some very hard training.

“As a youngster I was a good swimmer and my father would drive me to all my early morning swimming sessions and to galas and competitions.

“He died a day after being diagnosed so I did it in his memory, but my aunt and her daughter are both suffering from lung cancer so it’s affected my whole family.

“I set myself a £500 target so I was amazed when I finally raised £4,001. I’d like to thank everybody who contributed.

“Training was hard but I’m so glad I put the hours in; I hope my dad was looking down.” 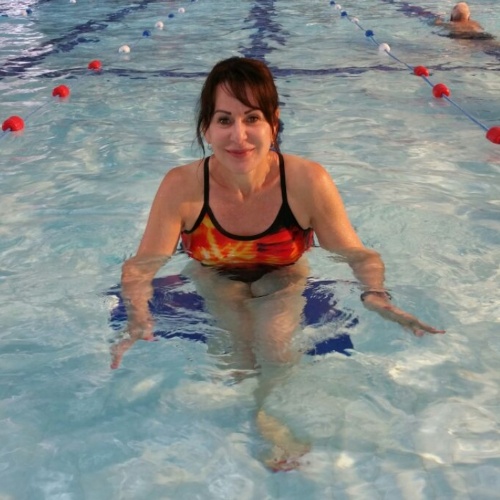