Berry Recruitment in Maidstone is expanding its base in Pudding Lane and is looking for consultants to join.

New jobs are being created across Kent in such numbersthat one of its prominent recruitment consultancies is to double in size.

Berry Recruitment in Maidstone is expanding its base inPudding Lane and is looking for consultants to join.

The latest REC Jobs outlook survey showed that 80 percent of employers said economic conditions are getting better and none of themhad reduced staff pay in the last 12 months, but 41 per cent had increased it.

With so many new jobs being created in the Kent economyBerry Recruitment is expanding to deal with the increasing workload.

Currently the business, which is part of the national BerryRecruitment Group, has eight desks, but aims to double that number.

It is taking on the premises next door – previously theDaily Bread café – to give it extra space for new recruitment consultants andimproved candidate facilities.

The consultancy is busy in all the sectors in which itoperates: industrial, driving, commercial, catering, construction andengineering.

Jody Page, who manages the branch, said: “Since we movedto this location in 2001 we have grown every year.

“We realised that we’d have to move into bigger offices,but then the premises next door became available so we are knocking through. It means that we retain our presence on the street wherepeople know us and where we benefit from good footfall.We anticipate that the new premises will be completed inthe autumn and until then we are open and it’s business as usual.”

Berry Recruitment has 30 branches across the country andis on track to achieve turnover in excess of £56m this year. 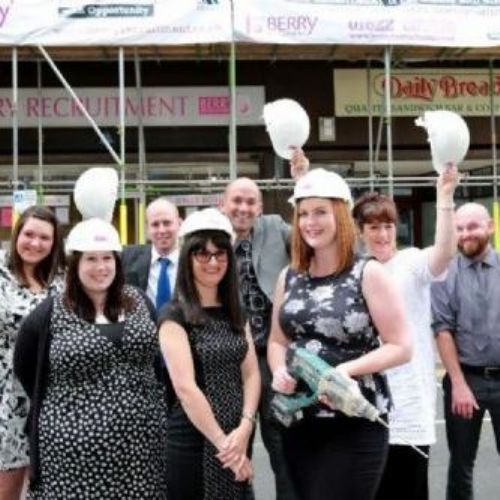